Possibly the most difficult network malware to detect today is the Advanced Persistent Threat or APT. I’ve also heard them referred to as advanced targeted attacks. Before I digress on how to detect this insidious enigma, I would like to provide some history and clear up some misconceptions about this type of attack.

The APT defined: it was first used in 2006, when it was coined by the Air Force “to describe specific types of adversaries, exploits, and targets used for explicit strategic intelligence gathering goals,”.   It is not meant to purely describe Chinese threat actors rather, an APT can be initiated from anywhere in the world. Despite claims by vendors, China is not the only malware hosting country as shown in the following figure. 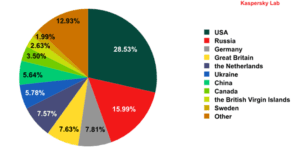 Without getting into a long history on Advanced Persistent Threats, I’ll provide a short overview.  Breaking down the acronym we find:

An APT is often not the typical brute force scan of the network.  It is a low and slow form of computer espionage generally used to target a specific government or business agency. How can we detect and ultimately stop it? First, here’s what often doesn’t work:

What can be effective in the fight against APTs?

“We’ve learned that NetFlow can tell us who is talking to who across our network, but how can we tell if either who is a bad actor? By checking the reputation of the IP addresses at both ends of the conversation.“ – Mike Schiffman at Cisco

Layered Security is the Best Defense Against APTs
Beware of vendors that claim to provide the only complete solution to stop advanced targeted attacks, there is absolutely no proven single technique to catching APTs.  A layered security approach is the best defense against APTs.