Good news, Cisco Application Visibility and Control – AVC NetFlow support will be in the next release of our NetFlow collector.  We are one of the first vendors to announce support for these new NetFlow v9 exports that are configured using Flexible NetFlow.

What is Cisco AVC
The Cisco Application Visibility and Control (AVC) solution is a suite of services in Cisco network devices that provide application-level classification, monitoring, and traffic control to improve business-critical application performance, facilitate capacity management and planning and reduce network operating costs.  You can find Cisco AVC Q&A information on their web site.

AVC Overview
With so many applications using port 80 or 443, traditional identification of applications based on ports no longer works.  This is especially true for those applications which are cloud based. Cisco Application Visibility and Control (Cisco AVC) restores the granularity required for today’s networking needs using a combination of tools that may already be present across your network.

AVC Components
As stated above, Cisco AVC Reporting is a combination of metrics that were released by Cisco with one very big addition.  Here are just a few AVC highlights of the details exported in NetFlow v9:

Below is a Cisco AVC Reporting example: 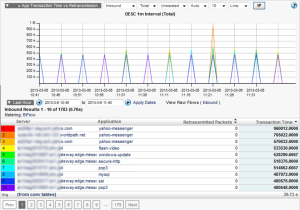