DNSChanger  is a type of DNS Malware  that infected about 4 million PCs computers and many of which (~300,000) are still infected.  Those still unaware of the problem will lose Internet connectivity on Monday July 9th.  More than 100 command and control (C&C) systems have been confiscated by the Federal Bureau of Investigation (FBI) but, this will not stop the outage.

According to Internet Identity (IID) who has been monitoring the clean up, the newest numbers were down from earlier scans. In March, the company announced that 19% of the Fortune 500 were infected with DNSChanger and that the government agency rate was at 9%.  Last week, IID said that its scans showed 12% of Fortune 500 firms were still infected.

“We’re all struggling with this,” said Rod Rasmussen, Chief Technology Officer of IID and a member of the DCWG. “There are a lot of people who just haven’t gotten the word.”

The http://dns-ok.us website quickly tells users whether their PC or Mac is likely infected with DNSChanger. 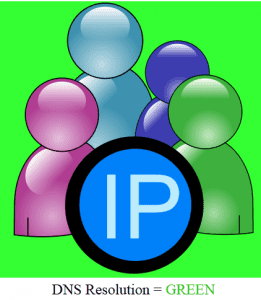 Be Proactive Against DNSChanger
Companies using NetFlow to perform IP Host Reputation lookups  on host-to-host communications would have detected the DNSChanger malware  at the beginning of this year.