The most advanced Flow technologies today come in the form of (FnF) Flexible NetFlow Reporting and IPFIX Reporting.  Some vendors have renamed these technologies to AppFlow, Cascade Flow, J-Flow and NetStream, however they are usually a near copy of either NetFlow or IPFIX.

If your company is contemplating the use of traditional or next generation flow exports, the insight you can gain depending on your hardware has never been greater.  Without a doubt, flow elements have been added to the technology in nearly all areas of performance and security which aid in end to end visibility.  Next Generation NetFlow collection and analysis requires:

Most of the above is available on older hardware.  This means you can gain access to next generation NetFlow even if you are purchasing refurbished Cisco hardware.

Next generation flow reporting tools like Scrutinizer provide customizable dashboards that extend details on anything exported within Netflow.  For example, the top interfaces with the most Jitter, Latency, Packet loss or Utilization across thousands of interfaces are shown below. 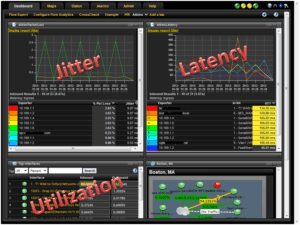 Choosing a vendor with the experience and contacts with all of the major flow vendors may make a difference in your overall experience with flow collection and analysis.

I often receive calls from system administrators who want to set up a user bandwidth monitor. The admins aren’t always…