I’d like to take the time to go through the steps on how a rogue DHCP server works. The more you know about man-in-the-middle attacks, the better you will be at uncovering the infections. Scott wrote a blog a few weeks ago that went into some more detail about detecting a rogue DHCP server and symptoms that you may be infected. I want to hit on how that activity works. 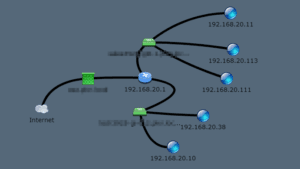 For today, I will be one of those employees that does not check the link I’m about to click on, while surfing the web on my lunch break. After I click on the wrong link and pull down some malicious malware, the hacker that placed that malware will soon be able to see all the traffic to or from my device on the network. This gives the hacker a way into your private documents, violating privacy and security policies that are put in place to keep that information safe.

One of the benefits of collecting NetFlow and IPFIX data from all of your network devices, is that you will have the story of every conversation that traverses your network; helping you find the infections, to limit the effect of man-in-the-middle attacks and other malware. Using the same filters that Scott was describing, we can see the conversation from the rogue DHCP server reaching out to the PC.