We recently had the opportunity to work with an exciting Juniper IPFIX MX Series export.  It provides traffic details that we haven’t seen before from this vendor.  The export is available in release 14.1X55 and release 17.1 in Q1 2017, but you also need the MX with subscriber/application awareness (using MS-MPC cards).

We were able to report on details such as TCP Round Trip Time, Packet Loss and DNS response time.  These metrics can come in very handy when troubleshooting slow applications.  Speaking of applications, their DPI engine identified apps such as Office365, Twitter, Hotmail, Lync, Yahoo, and Apple iOS updates.  It also provided the Internet host being requested, which may not be what the destination IP address resolves to. 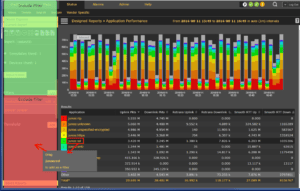 Looking a bit deeper into the flows they provided us, we found several HTTP details that will prove useful to Juniper customers.  These details included: 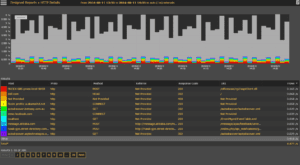 A partial listing of the details exported in the template can be found on the Juniper IPFIX template web page as well as the router configuration.  Below is an example of IPv4, but IPv6 is also supported:

As a result, we created a few dozen new reports to improve our Juniper IPFIX support. Be sure to check them out as I didn’t cover everything they are exporting in this post.  There are several other details such as subscriber VRF, name, type, IP Address, DNS latency, etc. 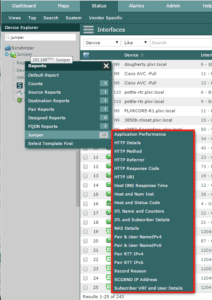 Reach out to our team if you would like to report on these rich new details.