Good placement in the Gartner Magic Quadrant for Application Performance Monitoring is highly sought after by many vendors.  The rich monitoring capabilities needed by a solution to participate in the quadrant is way beyond what most people consider possible with traditional flow exports. Today however, this has changed.

Several weeks ago I read a post from Jonah Kowall at Gartner that read “The movement of Application Aware Network Performance Monitoring (AA-NPM) away from Application Performance Monitoring (APM), as a unique market with different technologies and buyers. [sic]”  Although I agree that it is important to clarify the differences, I believe the two will continue to work together for an ideal overall window into the performance of business applications.  Separating the two might make it easier to manage the market leaders, but vendors will continue to provide a complete solution which encompasses all of AA-NPM and APM.

The differences between APM vs. AA-NPM

Certainly the two can be clearly separated, but I’m sure most would agree that the two provide greater value when their measurements are brought together.  A year ago, Gartner considered the leaders of APM to be IBM, CA and Compuware.  These vendors demonstrated a clear leadership role in the 5 elements of the APM process as discussed below. 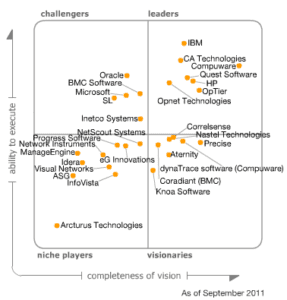 The Gartner Magic Quadrant for Application Performance Monitoring defines APM as a process with five elements, most of which can be tracked with NetFlow or IPFIX: 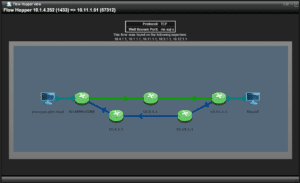 Gartner Analyst, Will Cappelli and Jonah Kowall, had this to say about robots: “The oldest commercialized approach to capturing end-user experience data, this technology requires the placement of software robots at various locations near which users might access an application, then the robots run scripts against an application in production, and record response time and availability results. This technology has been frequently criticized because it does not deliver information about real user experiences”  They went on to say this about packet analyzers:  “packet capture and analysis appliances are, in whatever number of protocols they may have fluency, data-center-bound. Hence, they’re blind to the increasing number of sources of latency and other performance problems that originate in cloud services that lie along an application’s execution path”

The release of Cisco Application Visibility and Control flow exports allow NetFlow and IPFIX to play a larger role in AA-NPM and APM solutions.  The application metrics include details on latency, packet loss, jitter, retransmits and more.  These measurements differ from robots executing synthetic transactions because, AVC measures the performance of the flows involved with the end users application experience!

Gartner stated last year that flow analysis should be done 80% of  the time and that packet capture with probes should be done 20% of the time. Source.  With the release of AVC, perhaps Gartner will increase the ratio from 80/20 to 90/10.  If you would like to read more about Gartners position on Application Performance Monitoring, the 29 page Gartner Magic Quadrant for Application Performance Monitoring document can be purchased from their web site.