How can my company benefit from Flexible NetFlow?

Traditional NetFlow will Dominate
Probably the single most popular way companies use NetFlow won’t change. Traditional NetFlow using a Normal Cache exists for the same reason NetFlow v5 is still more popular than NetFlow v9. In most cases, it provides the details necessary to solve the major issues.
• who is causing the problem
• who are the top talkers, applications, etc.
• what are the abnormal behaviors

Permanent Cache
Permanent Cache on the other hand could end up replacing Cisco’s IP Accounting technology as this type of cache can mimic the running counters of a MIB table. It can also be used to store routing information that is fairly static and doesn’t need to be exported frequently. Note: since it is limited in size, packets matching the filter could be dropped if the cache is full. A counter is maintained on the number of dropped packets.

Information on Flexible NetFlow is slowly making it onto the web. As a Cisco Technology Partner, we work with key individuals at Cisco Systems. 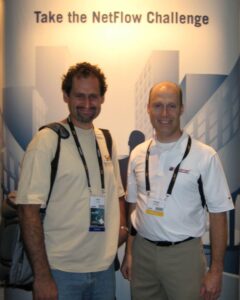 Above is a picture of me at CiscoLive 2008 with Cisco’s NetFlow Visionary: Benoit Claise.  Check out Benoit’s book.