Cyberspies
I read this article the other day: Electricity Grid in U.S. Penetrated By Spies. At first, I was annoyed that these Cyberspies were able to sneak into our utility companies and leave software tools behind that could be used to reek havoc with our electrical grid. But then I was more surprised that our utility companies are crazy enough to put our electric grids onto the Internet.

Our Government will Protect us?
What should we do? Our government was unable to forecast the financial crises we are in. How could a bunch of politicians possibly see a potential electronic takeover of our utilities? Kind of Scary.

Network Behavior Analysis won’t save you
I started thinking about ways we can use Cisco NetFlow or sFlow to catch these perpetrators. In doing so, I listed a bunch of things we might watch for:

What about NBA (Network Behavior Analysis)? Using Cisco NetFlow, NBA can baseline end-system behaviors and alert when a host talks outside its normal traffic pattern. This probably won’t help. Most NBA systems don’t baseline every unique host in the world a computer communicated with, especially when it comes to using the Internet. Contact with a host in another country, in most cases, won’t raise any flags; and if it does, the customer is probably tired of the false positives caused by the crazy amount of alarms innocent Internet browsing can produce.

Internet Threats Algorithm in Flow Analytics
In some cases, our Internet Threats Algorithm can help. Most of our Scrutinizer customers are running the FA (Flow Analytics) module. Several times per day, each Scrutinizer installation connects to one of our web sites and downloads the latest list of known Internet compromised hosts that are participating in questionable behaviors. The specific piece of FA that does this is called the “Internet Threats Monitor”. It monitors ALL connections in and out of the Internet for any internal computer communicating with an Internet host that is on the list. If communication occurs, an alert is triggered and the host’s Unique Index is raised. It has proven to be very effective, but not perfect. How does it work?

Below is a partial list of the algorithms FA uses for Network Behavior Analysis. The time trend displays how long the algorithm takes to run each time it executes. The count column trends how frequently the algorithm is triggered. 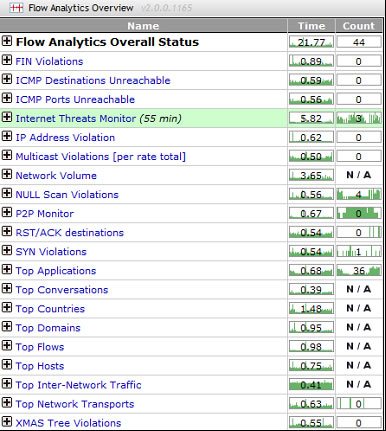 Thresholds can be set per algorithm. For example, the default threshold for Internet Threats is 1. Some threats that could appear for this algorithm include:

Preach Abstinence
It seems to me that the best security measure these electrical companies could take might be ‘abstinence’ from the Internet. Why do they need to be on the web anyway?