Scrutinizer v7.2 NetFlow and sFlow Analyzer has been released.  A complete log on the updates is on our web site.  The migration from v6.X to v7.2 is also done. Please contact plixer +1 (207) 324-8805 for assistance on the migration.

We are offering 2 webcasts to cover many of the new features for Network Traffic Analysis.
• A new report ‘Flows’ available in Flow Analytics
• A new algorithm which is reliable at detecting DDoS attacks with NetFlow
• Improved Cisco ASA reporting with Flexible NetFlow
• Several other features and bug fixes

We will place a heavier emphasis during the webcast on the following: 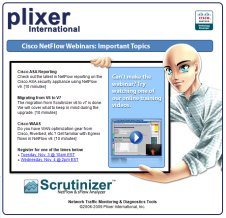 Register for one of the times below

See the above image advertising the webcast here.  I hope you can make it.