It has been exactly two years since I wrote the blog on how the Internet is overloaded.  Pressure continues to rise but, we haven’t had the black outs that some had predicted. If you search the web, you can find several articles and blogs on this topic. A few of these posts reference Nemertes who has since taken the post down.

“This groundbreaking analysis identifies a critical issue facing the Internet – that we must take the necessary steps to build out network capacity or potentially face Internet gridlock that could wreak havoc on Internet services,” said Larry Irving, co-chairman of the Internet Innovation Alliance.

“It’s important to note that even if we make the investment necessary between now and 2010, we still might not be prepared for the next killer application or new Internet-dependent business like Google or YouTube. The Nemertes study is evidence the exaflood is coming.”

I still don’t share in their prediction. If all of a sudden some killer web site(s) were crushing the internet, ISPs would simply block or throttle them.

How many of us use Vonage or MagicJack to place calls?  Have you ever noticed that quality is not always awesome? I agree that most of the time its great however, not as consistently as it is with a POTs (I.e. Plain Old Telephone) analog line. POT calls have guaranteed end to end bandwidth.  If bandwidth is not available, you’ll dial a number and hear something like: “All circuits are busy now, please try your call again later”.  With VoIP, you’ll almost always get a connection albeit sometimes with poor quality.  This is where I believe consumers will have to make compromises to ensure that the internet can continue to grow and treat customers with different needs fairly.

I agree with service providers who are throttling certain “traffic behaviors”.  Notice that I didn’t write “types of traffic” (e.g. DSCP values of EF, CS5 or 0) as this pertains to QoS requests.  Although, I think DSCP is how many of us will see our connections to the internet improve.

I should also state that I partially agree with across the board throttling of applications like BitTorrent (P2P).  As far as I’m concerned, as long as the P2P traffic behavior isn’t stealing excessive bandwidth via enormous amounts of simultaneous connections, leave it alone.  As a service provider, excessive connections is a behavior that I may want to allow as long as the consumer is willing to pay.

If you aren’t aware, numerous connections is how some savvy internet users steal bandwidth using tools like BitTorrent from the non sneaky.  I believe service providers have a right to make sure their customers are receiving equal bandwidth regardless of each customers technical know how but, this is easier said than done and BitTorrent isn’t the only bandwidth hog.  Cisco predicts that Internet Video to TVs and PCs will grow exponentially: 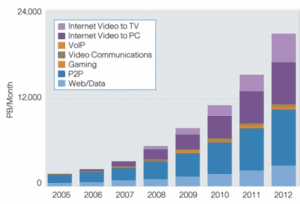 Sites like YouTube.com, Hulu.com and Facebook.com can cause considerable traffic volumes as well and most users don’t even give this much thought.  How come?  It’s simple, the cost of using a little bandwidth vs. a lot of bandwidth is the same and it isn’t something many consumers think about.  This will change.

Consumer Behavior Will Change
Why will consumer behavior change when it comes to bandwidth consumption? It will change for the same reason we are careful not to leave TVs running or lights on in the house when no one is using them.  We don’t want to see a huge electric bill. I predict that we may be headed for the same thing when it comes to Internet bandwidth usage.

Billing Based on Behavior
Service providers are already starting to charge based on bandwidth consumption and I think that this business practice will continue to grow.  Those who like to use Skype during the day for voice communications may have to pay a bit more for the prioritized (DSCP) VoIP traffic.  In return the call quality will be better during busy traffic hours.

Those who like to watch lots of youtube.com videos or view lots of pictures on Facebook may end up paying more for total monthly traffic volume.  What I’m getting at is that the one price fits all model that many of us enjoy is probably going to change.  It basically comes down to people using excessive amounts of bandwidth may end up paying more than those who don’t, just as those who own more expensive houses have to pay more in property taxes.

Is it fair that people who use more bandwidth or demand better quality of service (QoS) pay more than those who don’t?  If Cisco continues to be correct in their video growth predictions, exponential bandwidth consumption will continue.  I agree that traffic congestion has and will continue to be a greater pressing issue. Billing with NetFlow may be the way to manage it.

Summary
Don’t expect an Internet crash however, bandwidth brownouts may occur.  Brownouts are when the user experiences sluggish internet speeds. In time, service providers may respond with specialized bandwidth billing based on the behaviors of overall household consumption.

Hopefully service providers will prompt end users when they click on something that demands more bandwidth.  A window with a message like “Would you like to prioritize this traffic for faster download or is best effort good enough?  You will be bill accordingly.  Click a button: YES / NO.“

How will ISPs identify the applications?  Maybe they will use Cisco NBAR or maybe they’ll just watch the traffic behavior from your household and when it exceeds a threshold, you’ll be prompted with a question or simply be throttled back. Notice that service providers don’t guarantee download speeds.  Rather they say up to XX Mbps as shown on Comcast.com:

Don’t believe for a second that you will always be able to download at rates of 15 Megabits per second.  This is like getting on route 101 south in San Francisco at 7:30AM and thinking that you will be able to cruise at 65 MPH.  My point is that you can go faster only if bandwidth is available and often times it isn’t.

I don’t know if it is fair or not, but I can say that invoicing based on traffic type (i.e. DSCP) and bandwidth usage is possible with NetFlow billing systems like the one we built into our NetFlow Analyzer .  And if consumers start feeling the cost repercussions from their internet practices you can bet they will think twice before downloading content and hence, their behaviors will change.

Do you feel that those of us not using excessive bandwidth should carry the costs of their traffic behavior?