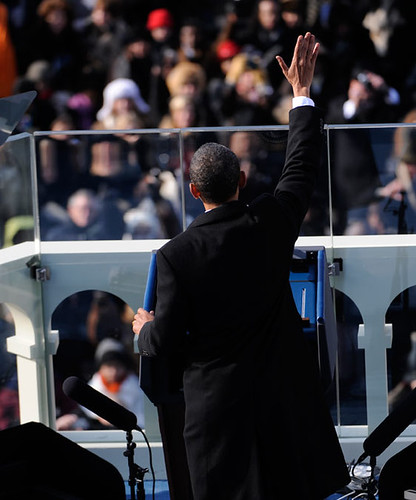 Since the inception of the internet people have been saying that we were on the cusp of a new era in history – a digital age. One where our lives are linked seamlessly via a mass collective of shared information. On January 20, 2009, as Barack Obama was inaugurated as the 44th president of the United States, it became painfully obvious that we are no longer on the cusp of this digital age, but entrenched in it.

Welcome to the digital age

Many reports have the worldwide internet usage leading up to the inauguration spiking up some 54%. As President Obama began his speech that number, in the U.S., would reach as high as 60%. While we already know that Facebook can increase network bandwidth, the social media giant, who partnered with CNN to bring a streaming feed of the event to its overwhelming 150 million active users, may have reached new heights in causing congestion. Only five minutes after the inauguration, Facebook was touting over 200,000 status updates (1,000,000 by the end of the broadcast), with an average of 4,000 people commenting on the Facebook CNN feed every minute.

Early statistics show up to 1.5 billion people being expected to watch the inauguration, with many of them doing so via the internet. Akamai Technologies, a leader in the streaming media marketplace, claims tens of millions of viewers watched streams from them at some point during the day. The number of simultaneous viewers reached a company record of 7.7 million at one point.

It’s important, but how important?

With the increased usage of online media sources comes an increased stress on corporate infrastructures around the globe. It is now more critical than ever to watch not only the amount of content traversing the corporate network, but the type of content. Although an important moment in American history, it raises the questions, “Is it business critical? How can it impact applications that are crucial for business operations?”

This is obviously an event that many want to be a part of or feel involved in, and the internet certainly makes that possible. But when it comes down to increasing internet usage on the corporate presence to potentially harmful levels, IT managers will inevitably have to make these kinds of hard decisions.

Make sure to set limits

Using available technologies like NetFlow and SNMP to monitor network bandwidth usage can be helpful, because it can tell us if the type or amount of traffic filling the pipes is harmful. When is enough enough?

There’s no doubt that as more and more average users begin to utilize streaming media services from work, the preventative safety measures we put in place become all that much more important to maintaining network stability. While we are trying to keep Facebook and CNN traffic at bay today, tomorrow we will be attempting to block YouTube traffic for those that didn’t watch the event live.

Perhaps it’s time for us all to truly develop a little patience and put our TiVo® to good use.