A few employees here work remotely and use VoIP when connecting to the PBX here at corporate. We recently upgraded the router of one of the employees who works from home to Cisco IOS v15.1.(3)T to take advantage of the Cisco Performance Monitoring NetFlow exports.

We noticed the Jitter values in the new performance reports seemed a bit high and decided to investigate a few things, one of which was the codec.  Notice the ALT value outlined in red below in the Cisco Performance Report.  The phone was using the G.711 codec (PMCM uLaw uncompressed) and the report told us that a typical call was using  87.54Kb/s. 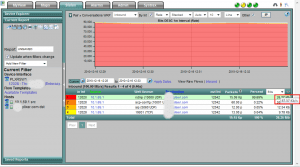 We then confirmed the codec by capturing the packets with Wireshark: 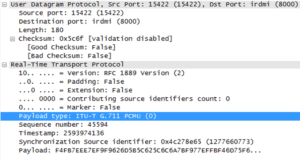 Although 87.54Kb/s doesn’t seem like much, when 8-10 calls are going over the same connection, the bandwidth consumed adds up fast.  We decided to upgrade the phone to the G.729 codec and placed the same telephone call. This time the bandwidth consumed was 31.26Kb/s.  We were a bit surprised to see a better than 50% savings on bandwidth and the call quality was better. Notice the ALT value outlined in red below in the Cisco Performance Report: 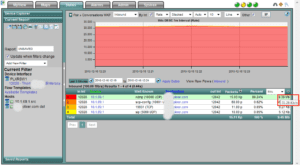 Again, we confirmed the codec being used by the phone with Wireshark as shown below: 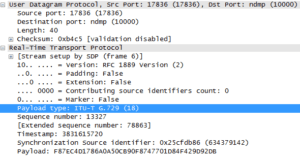 Cisco does have plans to export the name of the Codec as well as some HTTP details like URL in a future release. In the mean time, if you have to have these details now you can checkout the Flow Audior(TM) or the nBox as they also export CallerID. 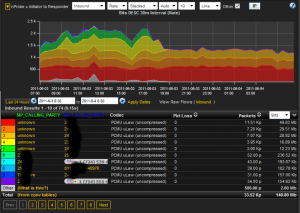 The Cisco Performance Reporting technology using NetFlow can be used for more than reporting on Packet Loss, Jitter and round trip time.  It can also be used for base lining all codecs, confirming hop to hop DSCP values and more.  All around, I’d say that the Cisco Medianet solution which uses Flexible NetFlow is more than just a marketecture. It is a huge advancement in how we are going to guarantee end to end quality of service for media rich communications and can even be leverage for cloud service monitoring. Our NetFlow VoIP reports are worth checking out for next generation network traffic analysis.