What a week! I flew down to Cisco’s Research Triangle Park campus in North Carolina for Interoperability and Validation Testing of Scrutinizer with Cisco Performance Monitoring. The entire process took all day as one of their CCIEs tested the validity of Scrutinizer’s reports on their NetFlow exports.  Check it out, we were the first vendor to become a Cisco Registered Developer for Systems Management of Medianet 2.0. 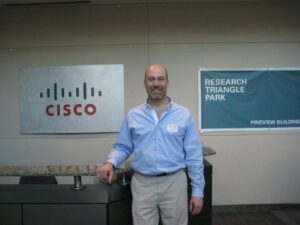 Cisco Medianet Monitoring is still an infant technology, however with the explosion of rich media content, network traffic monitoring is becoming increasingly important. The whole experience was exciting and we hope to be invited back next year.