Thanks to one of our Flexible NetFlow (FnF) Engineers we were recently able to re-test NetFlow multicast support. Prior to FnF we saw problems with active timeout not being recognized when the router exported multicast flows.

We had our lab router configured to route multicast traffic by adding the following to the FnF record.

The FnF record is:

Once we have the Flexible NetFlow configured, we need to generate traffic.

To generate multicast traffic, we used iperf . Once we had it installed, it was configured as follows:

iperf server was configred on my laptop. Command line below:

As you can see below, our NetFlow Reporting tool displays the different multicast destination addresses: 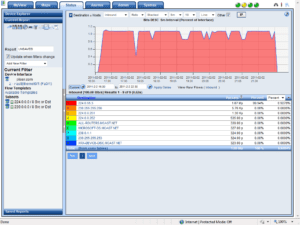 But, what interfaces are the multicast above going out? Lets take a look: 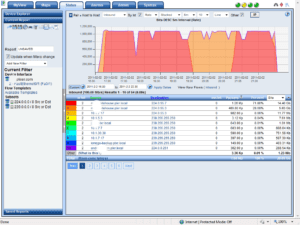 Notice above that the egress interface is 0 on all of the flows.  Multicast flows collected ingress have a destination interface of null or 0. To export the interface the multicasts went out, we must export multicast egress NetFlows. This is explained in step four in the Network world configuring Flexible NetFlow blog.

Note to inquiring minds: Multicast support in Flexible Netflow (FnF) does not seem to suffer from the active timeout issue we saw with the standard NetFlow multicast configuration.

Pre FnF Multicast Exports
NetFlow v9 had support for NetFlow Multicast Accounting prior to FnF. I copied the text below from the Cisco web site.

On the ingress side, multicast packets are counted like unicast packets, but with two additional fields (for number of replicated packets and byte count). With multicast ingress accounting, the destination interface field will be set to null, and the IP next hop field is set to zero for multicast flows.

Remember, we saw an active timeout with pre FnF NetFlow multicast exports (C2600-ENTBASEK9-mz.124-15.T10) where the active timeout was ignored and the flows were not exported until the multicast terminated. This resulted in big spikes in the graphs when trending 1 and 5 minute intervals depending on the duration of the multicast stream.

Summary
Now that you have NetFlow multicast configured, use the new Cisco Performance Monitoring NetFlow exports for Medianet.  These new Flexible NetFlow exports allow you to report on jitter, latency and packet loss.

If you have questions on setting this up or on reporting on the data, just comment below and I’ll post a reply.  You can also contact us.