Two Special Cause invitations, two invites to play some Mobster game, two for the Pathword game and enough Farkle invitations to choke a pig.

But geez, if you want to be a Pirate,  Mobster, Vampire, Superhero or a Farmer who has a green mohawk that owns a pink tractor (Thanks Joanne)… then Facebook is your own world within a world. Take a look at this demographic that I’ve posted here: 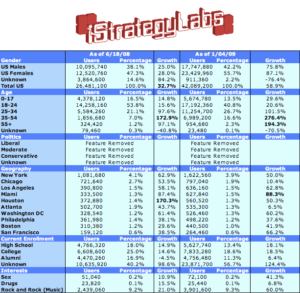 With silly little games and apps, you’d think that Facebook appeal would target the younger audience of 21 and under…

With the release of Scrutinizer v7, we have some great tools that would help track Facebook abuse on your network and to help snuff out the Farkle movement!

Using the new Applications Group function, you can now categorize your traffic a little easier. Now, you have the option to associate multiple IPs together, using the same port. To find this feature, go to the ADMIN tab and click on the DEFINITIONS category and choose APPLICATION GROUPS. Using this Application Group feature, I specified to Scrutinizer that anytime it reports a connection to any of these IP addresses using port 80, it will categorize it as Facebook usage.

However, if I connected to those same IP addresses using port 25, it would not report it as the Facebook application, but as SMTP traffic.

This is a fantastic feature, if you have applications at various remote sites that use similar ports, but need to be labeled differently.