We had a customer call in that wasn’t seeing outbound traffic on their H3C NetStream capable routers in our NetFlow Analyzer.   Normally outbound utilization is displayed using ingress flows from the other interfaces destined for the selected outbound interface.  In this case, the customer said their Netstream export was providing both ingress and egress flows.  NetStream is really NetFlow as is JFlow.

We requested a packet capture and found that they were definitely exporting egress flows in a separate template from the ingress flows.    This is really very different from any NetFlow or NetStream export than we have ever seen.  Why were we getting two different templates.  Investigation was necessary! 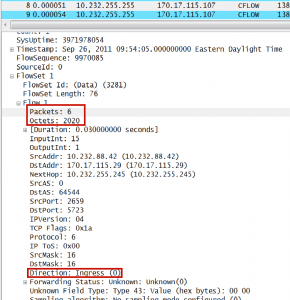 Notice above that Wireshark displays “Octets: 2020”.  Octets is our equivalent of octetDeltaCount. 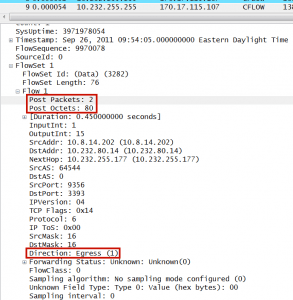 The logic we use when NetFlow or IPFIX reporting on interfaces is as follows:

What was the solution?
The solution for  the customer was to turn off egress collected flows.  When the user reported on outbound utilization on an interface, the front end wouldn’t find egress flows and would resort to using ingress flows which solved the problem.  The customer was happy.

Lets summarize what we found:

After our engineers determined the above, we realized  that there were a couple of options…

The customer went with option 1 and it is a good thing for us.  The 2nd option would have been considerably more work us and H3C isn’t a vendor we see a lot of demand for.  Since H3C shares roots with Huawei, I can only imagine that we could see the same issue with their hardware.

Huawei is making a big push in the Integrated Communications Technology market and hopefully IPFIX will be a part of their strategy.  John Roese is their new VP and GM for N. American R&D.  Prior to Huawei John was the CTO for Nortel and Enterasys both of which are companies that implemented IPFIX and NetFlow respectively.

Summary
If you are a vendor looking to implement NetFlow or IPFIX, feel free to run any engineering questions by our NetFlow and IPFIX Experts.  We can save you a lot of headache.  In the mean time, the NetStream configuration details can be found on their web site.