Cisco IOS IP Service Level Agreements (SLAs) help network administrators ensure that a high level of voice and data communication quality is maintained. Cisco IP SLA operations are a proactive method of reliably measuring network performance. IP SLA data can be retrieved and trended with an SNMP Performance trender to enable users to graph performance over time. Cisco IP SLA and SNMP should be in the tool belt of every network administrator. Pair these technologies with a NetFlow analyzer and you’ve got a great setup to help troubleshoot most network problems.

The purpose of this blog is to outline some of the IP SLA configuration changes in newer versions of Cisco’s IOS.

We’ve written a 4-part blog in the past that focuses on the following IP SLA operations:

Cisco IP SLA Jitter:
Probably one of the most important IP SLA operations for monitoring VoIP communications. When used with a responder, it allows users to retrieve metrics for Latency (to and from – source and destination ). Jitter, which is described as packet delay variance or the difference between source and destination latencies. Mean opinion scores (MOS) and ICPIF scores are generated to grade VoIP quality of communication. Several different types of packet loss and more.

Cisco IP SLA TCP Connect operation:
One can consider this to be a ping over TCP.

Cisco IP SLA HTTP:
The HTTP IP SLA operation is a very useful tool in the verification of performance of Web servers, Proxy servers, or any other HTTP server. Three metrics of performance attained by the HTTP operation are DNS Lookup, TCP Connect, and HTTP Transaction times.

There are white papers on IP SLA Configuration to help configure all four of these available for free on our site. If you don’t have them, you should get them. They’re a great reference to have on hand.

We’ve found that in some of the more modern versions of Cisco IOS, the IP SLA commands that contain the word “Monitor,” according to the Cisco’s IP SLA configuration guide, no longer accept a command with the word “monitor” in them.

For example, let’s take a look in the Cisco IOS IP SLAs Configuration Guide, Release 12.4 (The Jitter section explains how to configure an IP SLA Jitter operation).  On page 3 of the guide, it states that the IP SLAs Responder must be enabled on the target device. It goes on, giving the example as: 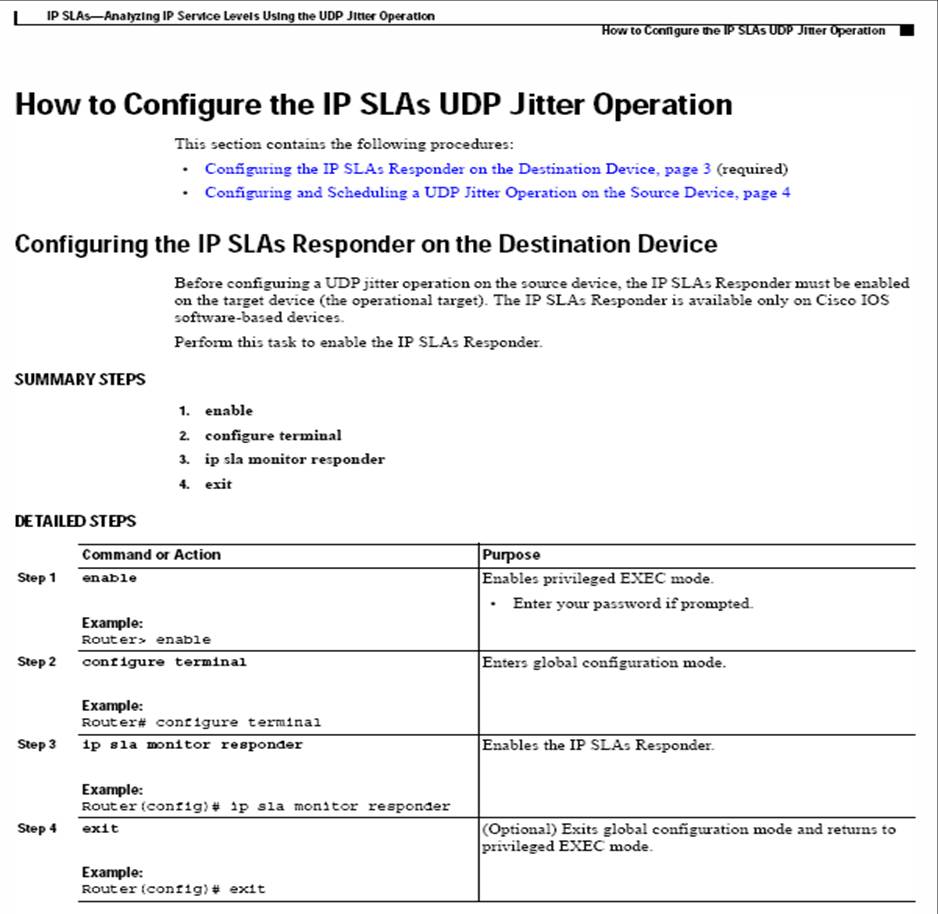 In some of the more modern IOS versions, the correct command is:

On the next page of the same document you’ll see that to create an IP SLA operation begins with: 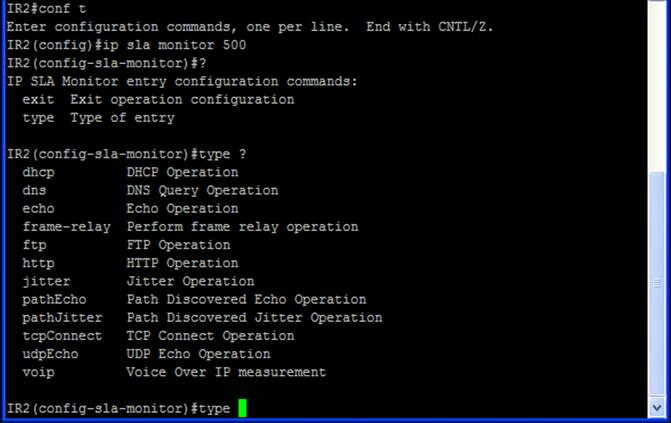 In the more modern IOS versions the correct command is: 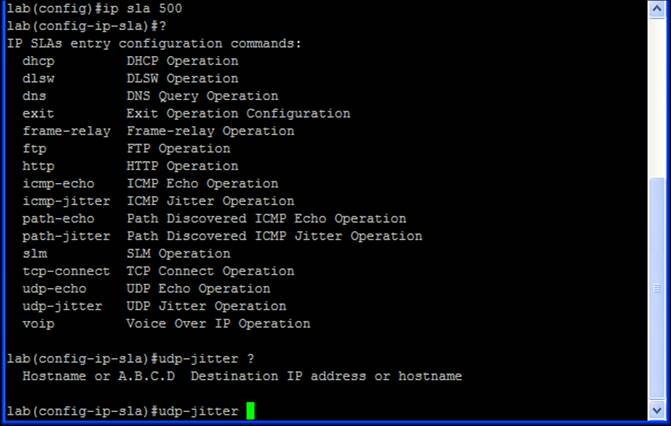 Also notice that in the screenshots above, you need to specify which type of IP SLA you want to create.

Where in the new versions, the word “type” is not an option. You simply state which type you are using:

So if you’re having issues configuring IP SLA operations, you may be on the newer code. As a rule of thumb, if your router does not accept the IP SLA commands with “monitor” in the command, simply exclude it and try again. The ” ? ” is your friend. Use the ? when configuring IP SLAs to see the next list of available options.

Now, before each of these variations of older IOS versions were using “rtr,” which was then replaced by “ip sla Monitor.”  In my opinion, the the IP SLA operations have been much improved since the earlier versions. Keep in mind that some SNMP OIDs are also different from earlier versions.