Have you heard about exporting egress NetFlow? Do you want to know why it is different from ingress NetFlow or more importantly, when to implement it for network traffic monitoring? I’ll cover this topic in today’s blog.

What are Ingress Flows?
Most of us are exporting NetFlow v5 which only supports ingress NetFlow.  This means that traffic coming in on an interface is monitored and exported in NetFlow datagrams.  What about traffic going out an interface? You guessed it, it isn’t monitored in NetFlow v5. Sounds kind of frustrating doesn’t it.  We’ll hold on. Most NetFlow vendors look at where an ingress flow is headed by looking at the destination interface. Using this information, we can determine outbound utilization on any given interface as long as AND THIS IS IMPORTANT, you enable NetFlow v5 on all interfaces of the switch or router.

What about Egress?
NetFlow v9 supports ingress and egress NetFlow.  In most installations, ingress flows enabled on all the interfaces of the switch or router will deliver on the information most of us need.  Apparently there is some confusion on when and how to use Egress Flows.  Here are a few reasons:

Hopefully the above helps answer the question: “why use egress NetFlow metering?”

Notice below that Scrutinizer tells us if ingress, egress or both are enabled on an interface: 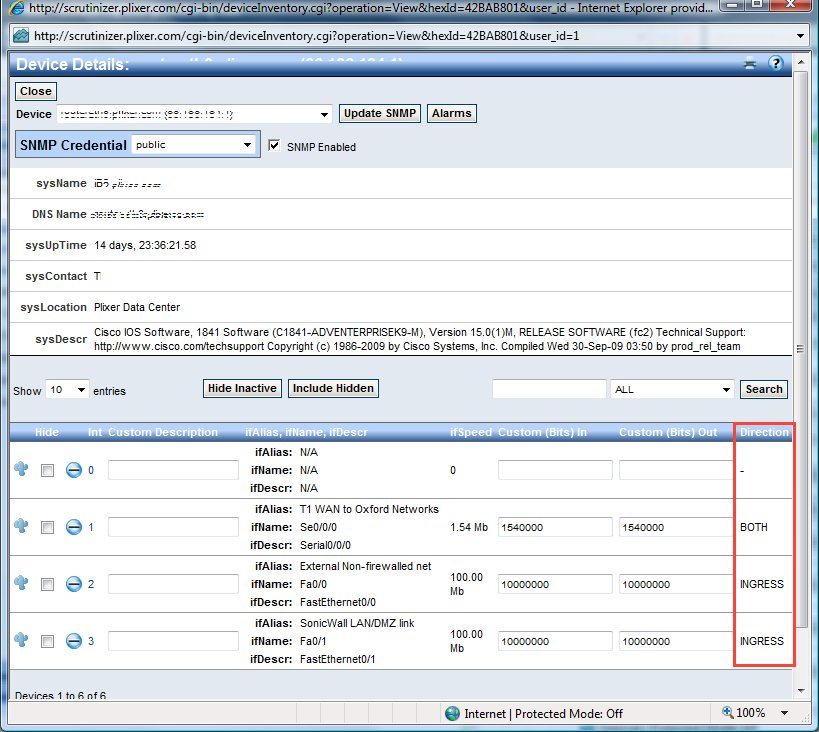 Watch out for Direction
We can determine Direction because NetFlow v9 exports a Direction field by default and it tells us if it is an ingress or egress flow. In Flexible NetFlow which is based on NetFlow v9, the Direction is not exported by default.  This is pointed out in our blog on egress NetFlow with NBAR.  Confused? Well, I won’t make it worse by digressing on the bidirectional flows exported by the Cisco ASA.  I’ll save that for another blog.  🙂