When it comes to understanding data exfiltration, you need to be able to see the whole picture. But most of us have been viewing it from our old 20th-century monitors that just can’t do this. Well, it’s time for an upgrade. With today’s advancements in NetFlow and metadata exports from a variety of vendors, there is no reason that we can’t start monitoring with the latest 4K monitors that give you full visibility no matter where you look. Today, I want to show you how you can get the complete picture by using NetFlow and packet capture to detect data exfiltration.

In my last post, I discussed how to monitor SSL traffic. Today, I thought I would continue down the road of traffic monitoring by taking a look at FTP traffic. Specifically, I would like to discuss how you can monitor FTP traffic, and how you can use NetFlow and metadata to understand what traffic is being sent over FTP. I will also provide some details on integration in Scrutinizer that will provide additional details relating to the FTP traffic.

Some of my colleagues are going to make fun of me because I titled this blog, “How to Monitor SSL Traffic” knowing that I absolutely hate when people call Transport Layer Security, SSL. What I’ve learned, though, is that most people still call it by the old Secure Socket Layers name, or SSL. Anyway, I digress. In this post, as the title self-defines, I will show you how you can monitor SSL and TLS traffic using NetFlow and metadata from the devices on your network. END_OF_DOCUMENT_TOKEN_TO_BE_REPLACED

We recently released an update to Scrutinizer that had many improvements to Flow Hopper. Now, for those of you that don’t know, Flow Hopper is a patent pending technology created by our engineers here at Plixer. Many utilities that display the path a flow took through the network topology rely on routing tables or SNMP information, which are fairly unreliable in a redundant architecture, especially one with several path options to get from point A to point B. Flow Hopper works with nearly all versions of NetFlow, IPFIX, and other flow technologies. It allows Scrutinizer administrators to see the path a flow took through the topology. The user can click on each hop along the way to see details on how the flow may have changed.

Before I outline some of the useful aspects of Flow Hopper, let me first explain how you can access it.

To start, you need to run a report on the exporter where the data you want to see is located. Because of the nature of Flow Hopper and multi-hop network communication, there are a handful of reports that will allow you to see the hop-to-hop details that Flow Hopper can show you. As such, when you select your report, be sure to choose either a Pair Report > Connections By Bytes, or a Pair Report > Connections By Flows report (see below). You can also view Flow Hopper if you are in Flow View, although, that will contain all the flow template details reported from the exporter, and may contain more information than you need. 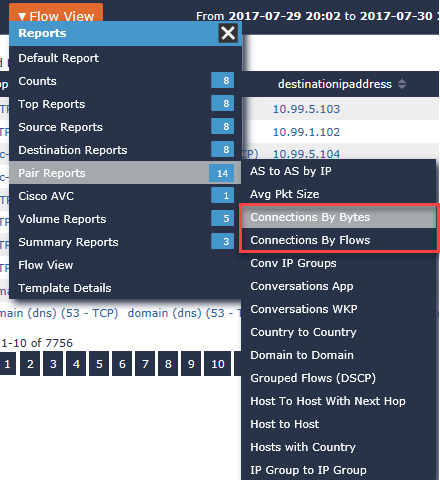 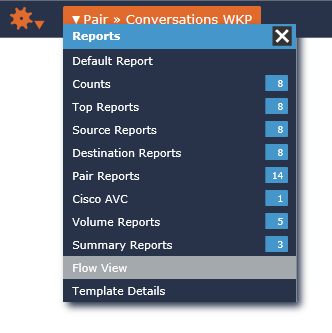 Now that you are in an appropriate report, make sure you have selected one minute intervals (we want to see the raw data associated with the conversations) because that is the only way for the Flow Hopper option to show up in the report.

Once you are viewing one minute intervals for your report, you will see the option for Flow Hopper within the report itself. Notice the new icon that shows up next to the report details. 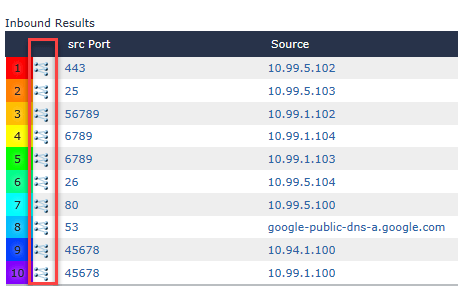 After clicking the Flow Hopper icon, a modal will open over the report. Flow Hopper will then run through a number of checks to provide an image of the bi-directional flows for the given conversation; this includes all devices (i.e. routers, switches, etc.) that the conversation went through. If any of those devices are experiencing performance degradation (high bandwidth utilization), the report will highlight those so you can view further details specific to those devices.

A major benefit of seeing the device-specific information, is that you can quickly identify where performance issues may be, and determine if your performance routing configurations are optimized. In an network configured with performance routing, for example, we shouldn’t see any degraded routers because the traffic should have been sent through another router to optimize the network. With that in mind, if you are seeing a report like the above, it may be a good idea to check your configurations. If you don’t use performance routing but see the above, it may be a good idea to set up routing policies to help move traffic through the network to prevent degradation on two of the hops.

With that in mind, when you see a degraded device in Flow Hopper, you can click the device and view additional information. In the case of the degraded router (10.99.3.1) we can see that it was on the return trip that (Backward B – A) that had performance issues. Specifically, we can see that there was both excessive jitter and latency compared to the Forward (A – B) traffic. This is interesting information that can provide us with some insight regarding where to look to determine root cause.

While there are a variety of different paths that you can see with Flow Hopper, any report that you will run will provide you with additional information to help you determine what is causing network performance degradation. To learn more about determining root cause delay, check out a previous article I wrote on Cisco AVC Flow Exports. I highlight our Root Cause Delay report about halfway through.

UPDATE: For those infected by older versions of Petya, you can find a decryptor here. 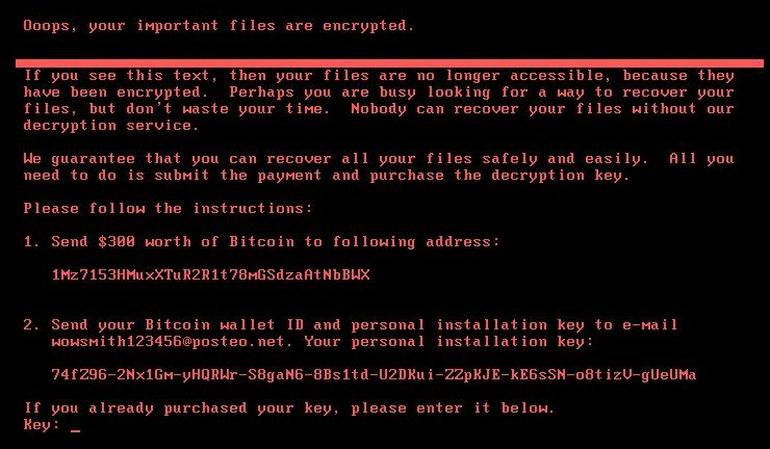 Petya encrypts the victim’s files with a dynamically generated, 128-bit key and creates a unique ID of the victim. Petya spreads using the SMB exploit as described in MS17-010 and by stealing the user’s Windows credentials. Some variants of Petya are notable for installing a modified version of the Mimikatz tool, which can be used to obtain the user’s credentials. The stolen credentials can be used to access other systems on the network. Petya will also attempt to identify other hosts on the network by checking the compromised system’s IP physical address mapping table. Next, it scans for other systems that are vulnerable to the SMB exploit and installs the malicious payload.

The compromised system’s files are encrypted with a 128-bit Advanced Encryption Standard (AES) algorithm during runtime. Petya writes a text file on the “C:\” drive with the Bitcoin wallet information and RSA keys for the ransom payment. It modifies the master boot record (MBR) to enable encryption of the master file table (MFT) and the original MBR, then reboots the system. Based on the encryption methods used, it appears unlikely that the files can be restored even if the attacker received the victim’s unique ID.

2. Who has been infected?

Major networks across Russia, Ukraine, Australia, and India are among the hardest hit by Petya, while a total of at least 65 countries have reported infections. The National Bank of Ukraine said it has been hit by an “unknown virus” and is having difficulty providing customer services and banking operations as a result. According to Microsoft, “we saw the first infections in Ukraine — more than 12,500 machines encountered the threat.” Petya is still affecting airports and ATMs in Ukraine and hampering international businesses from the shipping giant Maersk to the drug company Merck. Its victims also include hospitals in Pennsylvania’s Heritage Valley Health System.

3. How is it different from WannaCry?

While Petya has many similarities to WannaCry, there is one major difference that should be noted. WannaCry only infects the files on an infected system. Petya, however, locks down the entire hard drive, and, because of the way that Petya works, it is highly unlikely that you will ever recover your files, even if you pay the ransom.

There are a number of things that users and organizations can do you prevent being infected by Petya.

That, of course, is only a handful of the things you should do to protect yourself from such attacks, but they should be part of a well-developed incident response plan.

If you want to gain additional context with regard to your network, download our network traffic analytics platform, Scrutinizer, to see where everything is going on your network.